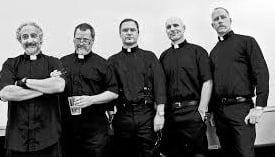 In 2015 Faith No More will be back in Krakow with its ongoing concert tour.

Faith No More is an American rock band which was formed in 1981. The current line up of the band consists Mike Bordin, Roddy Bottum, Billy Gould, Mike Patton and Jon Hudson. The band came out with seven album so far and Faith No More just released its seventh studio album Sol Invictus and the band will be on a world tour from the spring of 2015.

So Faith No More will be on a world tour from 2015 including Europe where the American band will have some concerts in Poland, Germany, Italy, the Czech Republic, Sweden, France and Finland as well.

The Faith No More concert in Poland will be in Krakow. The concert will be held on Monday on the 8th June 2015 and it will take place at the Kraków Arena and on Saturday on the 6th June the band will give a concert in Berlin, Germany. Tickets for the concerts are already available.